The Technological Tipping Point of Augmented and Virtual Reality

Born in 1992, I experienced both sides of the technology revolution. The rapid integration of technology into our society; the way it changed how we do almost everything on a daily basis, for both better and worse. Humanity is at an inflection point in history, and our direction depends on how we use powerful new technologies in the near future.

Before we had unlimited information at our fingertips with things like Google and Youtube, human cognition was at a high point, . Both the positive and negative effects that came with technology were non-existent. We were in a ‘Person 1st Tech 2nd' time.

As technology became more embedded in our daily lives, mass idea sharing, global interconnectedness, and new levels of productivity came with it. We were still in a 'Person 1st Tech 2nd' mindset, because applications were being designed to supplement human cognition, which we relied on throughout history up until this point. You could now connect with a colleague in India through a video conference, share a workflow on-line, and create unparalleled value and efficiency. It was like magic.

Unfortunately we were so blinded by this magic that we overlooked the negative consequences that came with it. As technology became so engrained in our world that human cognition, and ones overall wellbeing took a backseat. We were now connected 24/7, whether we liked it or not. Left the office at 5? Not really off the clock. Instant gratification through social media became a conditioned dependency . The mental and physical effects of technology addiction became new problems. Technology has become more of a necessity, and emotional stability and wellbeing has become less of one.

We are now very close to the 'Tech 1st Person 2nd' times, where technology is surpassing human cognition. Instead of controlling technology, we are starting to be controlled by it. If we do not make conscious changes in how we use and design new tech, this could be a major factor in the decline of our society. Technology is causing emotional problems and social problems for the individual, which are now being manifested and expressed in civil unrest, emotional problems, and a constant divide between communities.

Technology has such a major part in our daily lives (screen stat) that these negative affects are becoming deeply rooted in the individual at a subconscious, neurological level. We're being manipulated through our use of technology without even realizing it. We're constantly blinded by the magic of instant gratification and losing the ability to visualize long-term goals and put in the work necessary to achieve them.

Humans are now at an extremely important inflection point in our history, and there are 2 directions we can go.

Tech 1st Person 2nd - Continue to let technology surpass the human experience, causing long-term negative effects at an individual and societal level.Person 1st Tech 2nd - Take control of how we use new technology, focusing on individual well-being and being conscious of the long-term effects

Thankfully there is still hope. Whether we continue in a Tech 1st Person 2nd direction, or steer towards a Person 1st Tech 2nd one comes from how we choose to use two new revolutionary technologies emerging in the market: virtual and augmented (or mixed) reality. 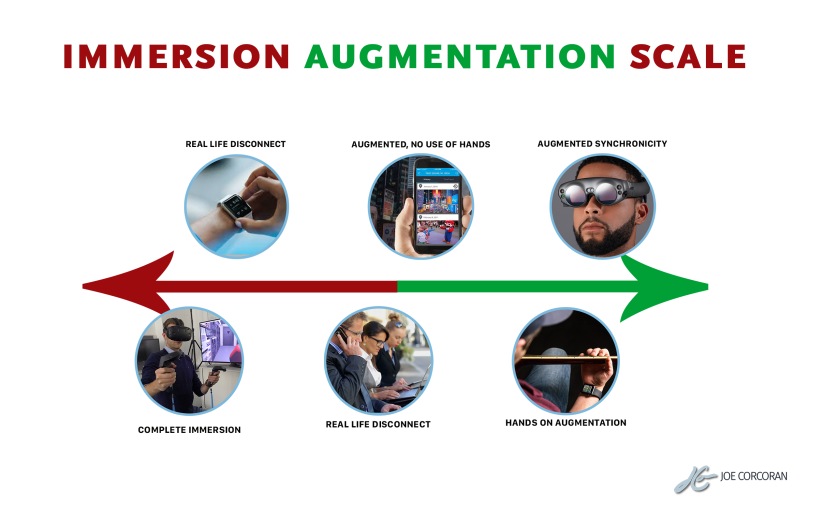 Since its' introduction, using technology has caused a disconnect from the act of living. To use a computer, you had to stop your activity, sit down and devote your full attention to it. This divide between your virtual world and real word is caused simply by technical limitations. The act of stopping you life and immersing yourself on a computer, smartphone, etc., is called immersion. This is where many of the negative side effects to the individual are rooted. Until now there has always been a clear divide between using technology and living life.

We now have more information than ever before right in our smartphones and other devices. This has grown the level of disconnect between virtual reality and real reality, and is causing more frequent problems as a result. Instead of only disconnecting for a few hours a day to work on your computer, people are now spending large periods of their life in a state of virtual disconnect.

If you look at the 'Immersion Augmentation Scale' above, you can see that Virtual Reality and Augmented (mixed) reality are at two opposite sides. This is because they represent two fundamentally different ways of human-tech interaction.

One one side is Virtual Reality, which causes a complete and total disconnect from your real-life. You put on a headset and are now in another world. Stimulus manipulation (sight, sound, smell, touch, etc.) are completely cut off and replaced by your technology. Technology is now in complete control of you. Virtual reality is the apex of a Tech 1st Person 2nd era.

On the other side, Augmented (or mixed reality), has the potential to use technology in a much different way, if we design applications consciously and with these effects in mind. In augmented, or mixed reality, relevant information is overlaid on top of the real environment around you. This way of using tech puts the human in control first, and provides supplemental information to enhance your life experience. This is a prime example of a 'Person 1st Tech 2nd' era.

Augmented and virtual reality are both relatively new technologies and have not hit their critical adoption phase. VR is mainly used for entertainment and gaming, while AR is even newer and used in commercial settings. It's predicted that by 2025, both VR and AR will see critical adoption on a consumer level. A third technology that will be crucial to creating optimized in vivo applications for both augmented and virtual reality is wearable sensors.

Augmented reality, if designed for correctly, can bring back the synchronicity between technology and humanity to increase both individual quality-of-life and the overall advancement of our species. Don't get me wrong, Virtual Reality is fun, exciting, and can be beneficial. However at its core, VR truly does disconnect you from your actual life, which as we’ve seen is one of the causes of all the negative side effects of technology.

I studied behavioral neuroscience in college (before dropping out), as I was always fascinated by the brain and body. Humans are one of the most perfectly designed systems to ever exist. As an inventor, I always try to implement biomimicry into my inventions, processes, and life. Nature is truly the best engineer. Before I go into my method of in vivo augmented reality applications, let me give a brief background on the biomimicry behind this concept.

As you go about your life, your brain (CNS) and body (PNS) are in constant communication with one another. Your PNS will sense something and send that information back to your CNS to process it. Based on whether your behavioral outcome / emotional state responds in a positive or negative way, will then send a very slightly modified signal to your PNS, which will guide your future behaviors to repeat positive outcomes and weed out negative ones.

When we receive external stimulus from technology (watching videos, reading text, etc), our central nervous system is being manipulated with generally little to no sensory feedback. With virtual reality, you are literally cutting off all outside stimulus and replacing it with content delivered directly to your senses from the VR device. A big problem is that this type of sensory overload without immediate and direct feedback from your PNS will over time alter your neurological pathways. This causes emotional distress, and broken responses to information that may not be in line with our best interest.

The proper way to bring us back to a Person 1st Tech 2nd mentality is by using Augmented (mixed) reality, and wearable sensors in a way that draws inspiration from the CNS/PNS feedback loop.

In vivo applications will work like this. The user will be equipped with different types of wearable sensors that mimic one's peripheral nervous system. Types of sensors include wearable clothing, heart rate monitors, personal EEGs, and many more. They will also be equipped with an augmented reality headset, that allows them to see and interact with the real world around them. This mimics one's central nervous system and internal visualization tools. AR will eliminate the virtual reality - real reality disconnect mentioned earlier, as opposed to VR headsets that will only propagate the problem.

One's sensors and headset will work in conjunction with one another like the CNS/PNS feedback loop. Once a user inputs their desired life goals, whether they be learning, increasing emotional well being, job advancement, or more, a pathway of steps necessary to get there will be laid out.

As one goes about their daily life, the supplemental instruction delivered in vivo to their AR headset will be constantly monitored using sensors, to determine if that particular type of instruction was beneficial or detrimental to the person behaving in a way that aligns with their goals. Just like the brain/body feedback loop, content displayed will be individualized to the user in a way that keeps instruction that works for them, and weeds out types that don't.

If we're not careful about how we look at, design for, and use technology in the very near future, there's a chance that we'll continue moving in a Tech 1st Person 2nd direction. The detriment of this will become more and more apparent on both individuals and our society as a whole.

It's time to take back control of our technology for good.